What Will God Do Through Burning Flags Of The World Prophecy?

This is a prophecy about burning flags, the death of nations and the enduring nature of God’s Kingdom. 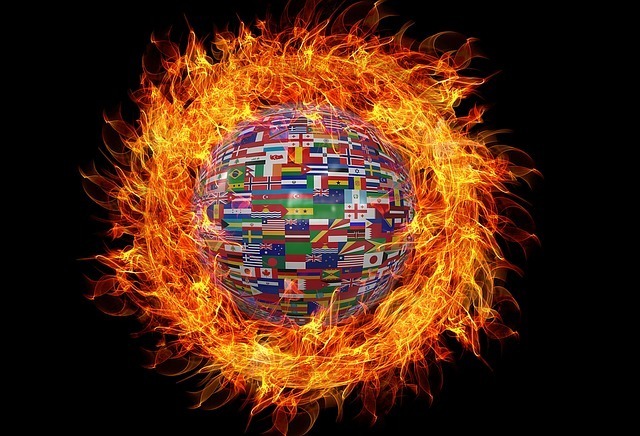 God gave me a prophetic picture over the summer, which I shared recently.

That picture was for the church but was intended to speak to people on a personal level, because it was about individual attitudes to our minds and spirits.

The Lord spoke to me again since then and this time, he gave me a different message.

This message is set on a much larger, international stage, one that involves a picture of burning flags.

As I write, the government of my country, the United Kingdom, is in chaos.

The move to leave the European Union has been the most divisive political issue I can remember.

Boris Johnson, our new Prime Minister, is trying to push through a Brexit deal before the UK leaves Europe on October 31st.

Where there used to be clear party lines separating the government and opposition, there now seem to be no boundaries to the fears and concerns of our representatives in Parliament.

In all my years, I have never observed the political arena to be quite like this.

But it is in this context that God reminded me that he is good and he knows what he is doing - even if no one else does.

A Picture Of Burning Flags

I was worshipping in church one Sunday when the Lord gave me this picture:

I saw many flags waving in the breeze, but they were burning at the edges, with flames all around each one.

There were flags representing many nations and as I watched, they were burned up completely. Only ashes remained.

There were also flags representing the kingdom of God.

They too had flames around their edges, but they were not consumed.

All the national flags were burned up and destroyed.

Only the Kingdom flags remained.

And they continued to burn forever, in the power of the Lord.

What God Is Saying Through The Burning Flags

I think the main thing that God is saying through this, is that he is in control.

We don’t need to worry or panic, because he is sovereign.

God is in control of the whole of history and for him, none of what is happening in the world today is unexpected.

For the Lord, there are no surprises and he is not dismayed.

He has observed the rising and falling of nations throughout his tenure as Creator.

And he judges the nations with grace and mercy, no matter how long or short is their fleeting time on this earth.

"God is in control and nothing happening in the world today is unexpected. For the Lord, there are no surprises and he is not dismayed."

In the last analysis, no earthly kingdom will last forever.

Only God’s kingdom will continue to expand until it covers the whole earth.

This is what King-Dom means: the Domain of the King.

Whether we see the fullness of his kingdom in this life or the next is a matter for debate.

But we know that it will happen.

Thoughts On The Burning Flags Picture

As I prayed over this prophetic picture, I was reminded of the period of history leading up to the birth and ministry of Jesus.

During that time, the young Macedonian king, Alexander the Great, used his armies to conquer the whole of the known world.

Alexander was a pagan, but God used him to bring about the unification of many lands in preparation for the coming of God’s own son.

The key thing is that Alexander spoke Greek. And his actions led to the Greek language becoming the de facto standard throughout the ancient world.

Thus were the conditions set for the message of Jesus to be passed from one person to another, far more easily than it might otherwise have done.

And when the gospel began to spread, it spread like wildfire!

Whether observers of the time were as confused by their circumstances as we are today, I don’t know. But the fact remains that God showed his power and wisdom, even through a heathen king.

I believe the timing of this prophetic word is significant, not least for us in the UK, where our government is in turmoil over Brexit.

However, I think it’s meant to have far wider ramifications than that.

In recent years, the unintended consequences of various governments’ actions have brought about unprecedented worldwide change.

Where there was once a drive to pull the nations together as one, that has been replaced by a rise in patriotism towards individual national identities.

And in some quarters, there has been an alarming resurgence of political extremes alongside the rise of global terrorism.

What Is National Identity?

Has the world so quickly forgotten the lessons of the 20th century, of two world wars and of the holocaust?

Do we really want to turn the clock back and retreat into national and factional rivalries of the past?

And what does national identity really mean?

As an Englishman, it’s a bit of a standing joke among my fellow countrymen that nobody knows what an Englishman (or woman) actually is.

Some ask the question, “What is English culture and what does it mean to be part of this country?”

But no one has a ready answer.

Similar questions are being asked in the nations across Europe, America and further afield.

However, the question of “who are we?” often leads to another question, “who are they?”

These apparently simple questions can result in tremendous uncertainty and may develop a darker culture of fear and paranoia.

But our God is love.

Burning Flags Of The Kingdom: A Different Hope

As believers, we have a different hope to aspire to, a new nation under God.

That nation, that heavenly kingdom, crosses and transcends all worldly boundaries and barriers. That’s true, regardless of whether those barriers are national, ethnic or linguistic.

“There is one body and one Spirit, just as you were called to one hope when you were called; one Lord, one faith, one baptism; one God and Father of all, who is over all and through all and in all.”

At a personal level, this links back to my previous word that our minds should be submitted to our spirits.

Whenever we feel fearful about the changing times, let us also remember that our God is unchanging and his kingdom stands forever.

If you found this prophecy encouraging, please share it on your favourite social network (hint: use the buttons on this page).